Gazpacho, a classic cold Spanish soup, is usually drunk by the glass in the heat of the Iberian summer. But I first encountered it on a beach in West Wales. And it is a moment that I will never forget, filled as it is with the shock of the new.

At the end of my first year of university my friend and I went to stay with her Mum Sheila. It was unusually hot and it was bliss getting out of the city, after weeks of exams, lazing in Sheila’s glorious garden and doing very little. One evening we went for a picnic on the beach and, for some strange reason, we decided to swim off the Pembrokeshire coast. The water was not quite as hot as we expected and when we came out of the water we were as pink as boiled lobster, as cold as chilled oysters, and very hungry.

As I walked up the beach I was expecting the sort of picnics I’d grown up with: sandwiches, a bag of crisps and maybe a Penguin biscuit if we were lucky. Hot tea would be served in a plastic Thermos cup that was shared between us all.

Back at Sheila’s car I saw the paraphernalia of a picnic as I knew it: a thermos flask, some red plastic cups and plates, stuff wrapped in foil. But, as I came to learn, Sheila’s food was never quite what you expected. First she handed us cups of gazpacho, garnished with ice cubes and homemade croutons. I’d never had homemade soup before, let alone cold soup and I couldn’t get over the tastes of salt, garlic and tomatoes, or the fact that she’d not only served it on a beach, but also bothered to make it look pretty. When I think about it these days I can’t get over the fact that, considering she’d never been to Spain and there was no such thing as the internet, she’d found such a recipe and decided to try it.

She followed this with some cold poached fish and hollandaise, then homemade cake. I can’t remember what we drank but I’m pretty certain it wasn’t tea tinged with the fragrance of plastic. It remains, even twenty-four years later, the most memorable picnic of my life. For the contrast in temperatures between the Irish sea and the June sunshine. For the sense of freedom, of growing up and on. And for the way it made me realise that ‘picnic’ like many words and concepts was not something fixed and defined, that it could be something different.

Even now I don’t mind a sandwich on a beach. But I’d rather have a cup of this…

For two decent bowlfuls you will need:

I love recipes with so few ingredients

Half a cucumber, chopped

1. Put a slice of bread into a liquidiser, or food processor and blend it until it forms breadcrumbs.

2. Peel and crush the garlic clove and mix into the breadcrumbs with a couple of dessertspoonfuls of olive oil. The crumbs should all be coated with oil but shouldn’t be dripping. 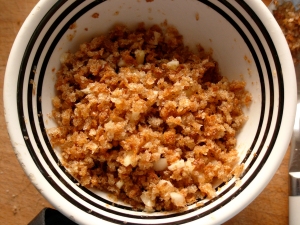 3. Blend the cucumber, the tin of peeled tomatoes and the pepper together until smooth. You may find, once you’ve made this a few times, that you prefer a thicker more tomato-based flavour; in that case leave out a bit of the more watery veg (the cucumber and pepper) or add more tomatoes. And vice-versa if you prefer a greener, fresher taste. This is the point when you remember your lessons on colours from primary school: mix green and red together and you get…brown. 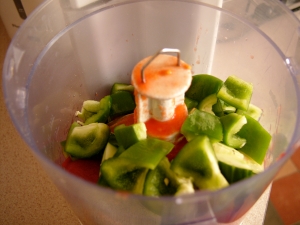 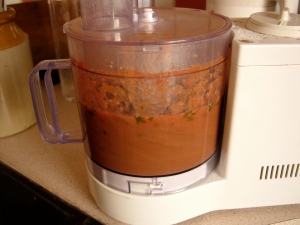 4. Pour the vegetables into a bowl and stir in the garlic-bread-oil mix. The bread will thicken up the soup and the garlic-oil will add depth of flavour. Stir it together well and season with a teaspoon or two of red or white wine vinegar, some salt and black pepper and some more olive oil. It can be eaten straight away (preferably garnished with ice-cubes and sizzling croutons) or the flavour improves if it’s left for a few hours.

4 Responses to Gazpacho: a cool soup for hot days