Spelt, an ancient, less refined and therefore more digestible form of wheat, was once only found in dusty health food shops and dictionaries but, in the last decade, it has become so fashionable that no self-respecting farmers’ market would be without it.

I discovered it when I became temporarily wheat-intolerant and, banned from eating ‘normal’ bread, started looking for alternatives. German rye was okay for sandwiches but not the best in a toaster so I began trying out the rather ominous, sulky and expensive ‘spelt’ loaves that squatted at the front of the market’s bread stall. Although it definitely inhabited the ‘bread with a purpose’ category that my best friend invented to describe Swedish ‘brick-like’ loaves, it tasted okay, kept for a while and made good toast. However, it wasn’t the revelation I expected and I stopped buying it.

Recently though, having got a bit bored with soda bread (mainly because I can’t eat a whole loaf all on my own before it goes off and I hate wasting it), I’ve been thinking about finding another easy bread recipe, something that doesn’t require me to make my own ‘starter’ and only needs a bit of bashing around. And then I came across Rose Prince’s ‘Three-Minute Spelt Bread’ in her book ‘The New English Table’. It is probably the shortest bread recipe I’ve ever seen. There’s no proving, kneading or rising; you just put all the ingredients in a bowl, add some warm water, stir, put it in the tin and bake. And it works. I’m a spelt convert; you will be too when you try this.

1/2 tsp sea salt (you might want to play with this amount; I’m going to add a bit more to my second attempt, maybe 3/4 tsp because I think it needs it)

Okay this is the best bit. It’s so short!

2. Put all the dry ingredients in a bowl.

3. Add the water, mix into a dough (as the picture shows it’s the cleanest dough ever) and put into the tin. 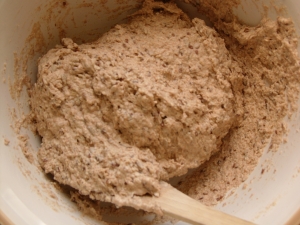 4. Bake for 1 hour. Rose says bake it until it ‘has risen, lifts out of the tin easily and sounds hollow when tapped underneath.’ But, as ever, ovens vary and so do opinions. My loaf was done after about 55 mins and I think it would have been better cooked at a slightly lower temperature because it was good and crusty but a little underdone inside. I’m going to try it at 180C for the same length of time and see if that improves it.

5. And voilà, a loaf worthy of the best farmers’ markets!