Singing for my Zuppa

Sometimes all I want is soup. Wednesday was one of those nights. A Tube strike (and therefore impossible traffic and full buses) meant that I walked to work and back and, although I am still, six months in, delighted that I can walk, twice in a day tests that delight. And as I was late home I was up to no more than opening a plastic pot, heating up the contents and serving it with toast. It was decent (Duchy Originals) soup, and the bread was good but, still, it wasn’t exactly the height of culinary treats. However, since it was quick, hot and comforting and I didn’t have to use what was left of my brain to work out something more complicated, it served a purpose, which I think is what soup represents for me. It feeds, soothes, and doesn’t need much work. It is, a bit like Pizza Express, a reliably consistent meal, without fanfare or fuss.

Even though one of my favourite soups is gazpacho, for me soup is a staple of winter, of staying in and hibernating. It’s a good food for the end of a journey, after cold hours in a train, on a walk or in a car or after an illness. When I was a child, packet soup (especially chicken noodle) was often what we ate during the seventies power cuts when we had one candle to light our house, and it was too cold to do anything but eat quickly and go to bed. Mum would throw the contents of a chicken noodle sachet into a pan of hot water; once it was cooked, and we’d eaten it, it would be time for bed.

I’ve made my own for years, having discovered as a student how easy it was, and now feel pathetic and guilty if I buy it. I’ve rarely budged from variations of a cooked vegetable puree thickened with potatoes and thinned with milk or cream. Soothing, yes. Filling, yes. Interesting, no. However, a year or two ago one of the freelancers I worked with mentioned that he swore by the soup (or zuppa) recipes in Giorgio Locatelli’s Made in Italy, most of which used dried beans and pulses. I wasn’t convinced, mainly because I’m not overly fond of beans, particularly not the effort of dried ones. And when said freelancer explained that he and his wife brought back bags of lovely dried beans from their rather lovely house in Italy, I somehow thought that my own efforts with the supermarket brands could never match his.

However, just recently, driven by a continuing desire for frugality (beans being the cheapest form of protein there is) and a wish for a less dairy- and fat-dependent diet (I can walk to work; I don’t always…), I’ve been trying out the Locatelli recipes. Most of them are long-winded: soak the dried beans overnight; cook the beans slowly with some herbs and vegetables; finally, make the soup. This all might sound very unlike me; after all I like the quick, the simple and the uncomplicated. But bear with me. For a start the first two stages of the soup don’t really constitute work, second, they use a soffritto base (known as mirepoix in French) which, once learnt, can be used for all sorts of other dishes like stews and finally the soups that result are glorious: complex, delicious and satisfying in a way that most soups are not. These recipes turn the lowly soup into a meal, not just a filler. And what’s even greater about them is that they are so versatile; once you have the basic three steps worked out you can vary them. Locatelli, for example, suggests adding spoonfuls of pesto or small pasta pieces at the end.

I’m going to simplify a couple of recipes here, for the sake of space, but I highly recommend hunting down the (rather beautiful) book and finding out the details. Whereas once I would have thought there was nothing to be said about this dish, Locatelli’s recipes have inspired me to experiment. With beans! Miraculous.

You will need (for four servings):

2-4 cloves of garlic, peeled but not chopped

a couple of celery stalks, chopped

a couple of decent sprigs of rosemary

a couple of small bunches of sage

150g pancetta or smoked streaky bacon, cut into small pieces (optional; he uses this in the chickpea soup but I think it might be good in the others too)

1. Soak the beans overnight in cold water (leave them at room temperature; don’t put them in the fridge). 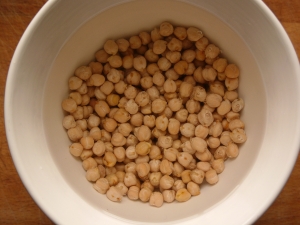 2. Drain the beans of their soaking water, then tip them into a large pan with double their volume of water, 2-4 peeled garlic cloves, the bay leaves, one of the chopped celery stalks, one of the bunches of sage and sprigs of rosemary and about 2 tablespoons of olive oil. No salt, notice; this will harden the poor beans into the sort of bullets you remember from school dinners… Cover, bring to the boil, turn the heat down and simmer till soft (this will take anything from 30 minutes, for the likes of borlotti, to 75-90 minutes for chickpeas and will depend on how old the beans are; I’ve yet to find any type ready in less than 45 minutes). Keep an eye on them and add more water if necessary. 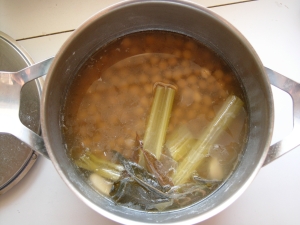 Once the beans are cooked, if you aren’t going to use them straightaway, they can be left to cool and then stored in the fridge for a couple of days, covered in their pan with the cooking water until needed. Don’t stick your finger into the pan or you’ll introduce all the bacteria from your skin into that lovely stock…

3. Finally (now, come on, those first two stages were a cakewalk) make the soup. Heat some oil in a large pan, and add the chopped carrot, remaining chopped celery, chopped onions and (if using) half the pancetta/bacon. Cook on a low heat until soft but not coloured. Add the tomato puree and three-quarters of the cooked beans (keep the rest on one side for adding whole later) and cook for another ten minutes. 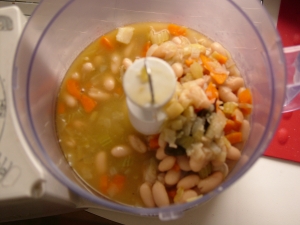 4. Blend or food-process the beans and veg until you have a smooth paste. 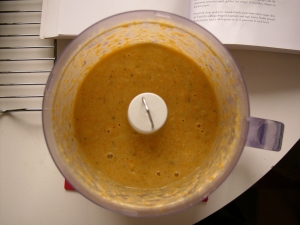 Return to the pan and heat with some of the beans’ cooking liquid until it has a soupy consistency (obviously that may be thicker or thinner depending on your taste). Bring back to the boil and add the remaining whole beans. Turn it down to a simmer.

5. If you are using pancetta/bacon, dry fry the remainder of this now until crispy. Drain on kitchen paper. If you like crispy sage leaves (and I do) you might want to fry a couple of these in olive oil too for garnish.

6. Season the soup with sea salt, ground pepper, a zig-zag of olive oil, the remaining sage (either fried or not) and rosemary chopped into small pieces, and, if using, the pancetta/bacon. I have yet to find room for eating toast or bread with this… 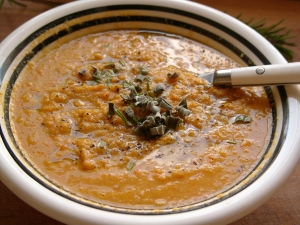