My nephew was 18 last weekend and, to celebrate, I made him 18 cupcakes. I’m not convinced by the flavour or, or fashion for cupcakes but they do make an amazing impact if they are made in bulk, decorated and, erm, organised in numerals… 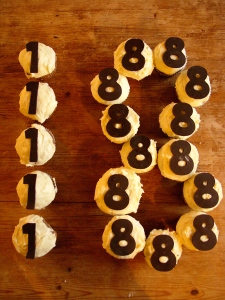 It’s incredible to think that these cakes, congratulating Joe on reaching 18, have been photographed on the same table that he used to hold on to when he was learning to walk. We watched a video of him aged two and a bit, as he toddled around a dinosaur park in Wales, and I was astounded to see how familiar that boy was, just as familiar as the man he has now become. It was as if no time had passed, as if that toddler was still very much in our lives.

Except that he’s not. He’s a grown-up. Soon he’ll be leaving home for university, for the Navy, for his own life. I felt incredibly sad and nostalgic when I realised how I would never see that little toddler again (and I’m only his aunt; heaven knows what it must be like to feel that if you’re his parent) and yet the person he is and has become is just as much fun. I think I was sad because time has passed so incredibly quickly; one minute this baby was taking his first steps, the next he’s learning to fly. And I realised that there is no holding on to the different versions of ourselves, of others. We can only enjoy them in that moment. And then let them go.